This week started with our trip to Bristol – you can read more about it here.

Lots of walking as the Harbourside and the city are not close to each other.  I’m so glad National Express let us get on an earlier coach home, I don’t think I could have walked much further, the soles of feet and calves were aching badly.
While we were having a rest a woman sat near by noticed me rubbing my feet and suggested getting some gel insoles from Primark. We headed off there, the insoles were £2.50 but new daps and canvas slip-ons were only £3 or £4. I couldn’t decide which colour to get, navy, white or burgundy..plus a pair of red daps..mmm decisions..oh what the hell chuck them all in the basket.. Four pairs of comfy everyday shoes for under £20. They’ll be great for our holiday and light to pack.

We bought a potty for Ash to use at our house but we’ve not seen him this week. His other Nanna and Grandad had him this weekend. Hubby’s night shifts run into the weekend and the last thing he wants is a two and half-year old shouting and banging while trying to sleep!! 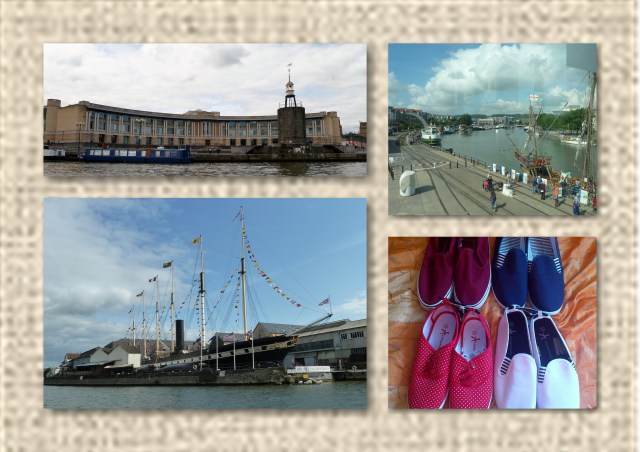 And my favourite Gromit – covered in Simon’s Cat Doodles.
Check out my other Project 365 pictures so far.

This is a round up of this week.

I’ve been posting everyday since Monday after seeing Fun as a Gran tweeting about the Ultimate Blog Challenge (UBC).  I thought this would fit in nicely with #project365 as The Boy and Me had also suggested following Fat Mum Slim photo a day for inspiration in July.  I plan to follow this unless I have something else for the day. Saturday should have been Favourite Smell but I went to the local Wetlands so that became theme of the day.

The collage here is a selection of photo’s for the week – Please feel free to pop over to any of my daily posts for more. 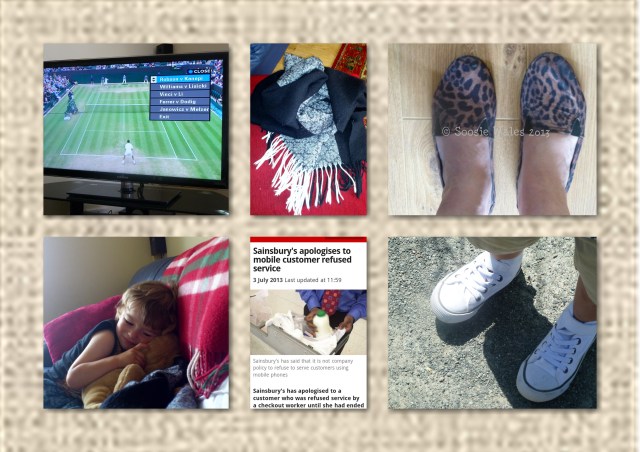 Love – GS and Winne the Pooh

Like most women I love shoes. However nowadays shoes do not love me!

I used to wear big heels in my younger days and had lots of pairs from flats to 3 and 4 inch heels. Full shoes, daps (plimsolls or sneakers), sandals, slingbacks..you name it I probably had them and in all sorts of colours too!

There was one pair that I loved and I wish I still had them – if only to look at them, as they’d be too narrow for my fat feet now – they were a pair of navy wedge sandals by Ravel, a mix of normal and patent leather. I adored them from the moment I saw them in Ravel’s window. Ravel shoes back in the 70’s were expensive compared to other companies.  When I bought them back in 73 you could ‘lay aside’ items and pay for them over a few a weeks. I was working in another shoe shop at the time earning £9 a week as a junior..(GAWD £9 a week I hear you say…oh yes..) and these shoes were £13.  (Over £130 in today’s value) Can you imagine paying more than a weeks pay on a pair of shoes??? I paid the store some money each week for a month and took home my pride and joy. Every time I wore them someone asked where I got them from. I treasured those shoes and I wore them for years.

Nowadays I go for comfort, usually flats or daps. I do have a couple of pairs of court shoes with a small heel but rarely wear them.
The pair in the photo were bought in the sale in New Look for £3. They are like wearing slippers, so comfy.

The week started off well with lovely warm sunshine on Monday.  Lots of washing done and hung out, Hubby taking advantage of the sun and soaking up some rays. Me, well I don’t really like sitting in the sun so I sit in the shade on our big wooden bench. 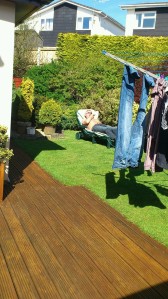 View from my bench!

Tuesday bought news that my son in Australia has been laid off from work. He worked for a famous airline and dealt with calls for high value customers needing access to lounges, help boarding etc. It was a new venture and the airline has decided not to continue with the service and the calls will be directed back to their ‘normal’ service call centre. He’s since got some part time work that will last to the end of the month. I hope he finds something soon (or decides to come home….Unlikely!!)

On Thursday I decided I needed some new dappers (plimsolls / pumps / sand-shoes) so I popped to the local shopping centre and took a look around. Some pink ones in Peacocks..mm not really me – they were a bit bright! Then I noticed a sale in New Look, I found two pairs at less than half price – woo hoo… One pair of canvas slip-on with grey/blue animal print and pair of daps – black with little flowers. Both pairs for £10!

On Saturday Ashley and I had a wander around Cwmbran.  Back at home he enjoys playing with his truck, mega blocks and has started scribbling on the Aquadoodle Mat. 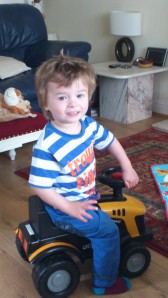 Ashley playing on his truck

He also likes being tickled and also tries tickling back – but that ends with him being a bit rough and slapping and pulling hair!! On saturday I had the laptop on while he played and he decided to climb up behind me on the sofa..cue a head bashing..he jumped a bit too much and the cushion under his feet went one way and he went the other over my shoulder and straight onto the coffee table – now that’s got to hurt it’s marble!! Well he cried and had a lump come up on his head.. oh bad Nanna!!! He soon recovered and we then had a hair brushing session..his hair is so fine it holds a good static charge and sticks up well!!

If you’d like to read more about the project please click on the 365 badge over there on the right.